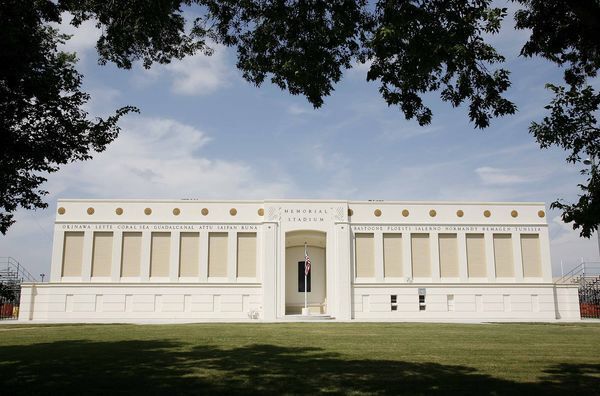 The third leg of the project’s “stool” is the Grand Island Public School, already committed to spending $2 million on Memorial Stadium.

Project plans for stadium, built in 1947 and suffering from both age and the demands of outdoor venues in the 21st Century, are twofold. The first is focused on restoration of the facility: a brand new West Stadium built from the ground up, all new seating for both the West and East Stadiums, new restrooms, new concession stands, new locker rooms, new field turf, track resurfacing, a state-of-the-art two-level press box, meeting rooms, a new addition to the East Stadium that would add nearly 500 seats to Memorial Stadium’s total capacity, and technology and amenities throughout to meet the needs of events in modern stadiums.

Equally important to planners will be the preservation of the East Stadium’s iconic facade on which are permanently etched historic battle sites from Guadalcanal to Bastogne to Salerno. From the outset Memorial Stadium, true to its name and its linage, has a deep and abiding respect for those men and women who have served in the military. You can take a virtual tour and view images and plans for the new stadium in the photo gallery.

Also at that link you’ll find the moving video “Home Field Advantage,” which introduces the Memorial Stadium Project and its leadership: Super Bowl champion Tom Rathman and Holly Yencer Rathman, both 1981 graduates are the project’s Honorary Chairs. Co-Chairs are Jeff Richardson and Jane Jeffries Richardson, both from the Class of 1983, and Jim and Maureen Karhoff, Jim from the Senior High Class of 1960 and Maureen from the Grand Island Central Catholic Class of 1960. The video includes rare and historic footage of All-American Bobby Reynolds breaking tackles for the Islanders.

Finally, the site has the plenty of history, too, including  the story behind Memorial Stadium’s beginnings, which started over a cup of coffee.

The new field in the restored Memorial Stadium will be known as Jack Martin Field. Lanny Martin’s generous lead gift is to honor his father, Jack Martin, a tireless supporter of all things Grand Island and — through hard work and service to others — a mainstay in giving back to his community. A former vocational agricultural teacher at Senior High, Jack Martin went on to establish a successful business and become Grand Island’s mayor. He and his wife Lucile raised six children, all Senior High graduates. The family established the Jack Martin Scholarship Fund in 1998 and the Lucile Martin Dream Scholarship in 2012. In all the Martin family has awarded over 100 scholarships since 1998.

Using Lanny Martin’s gift as the bedrock on which to move the project forward, architects, engineers, and planners have developed two approaches: a primary project and expanded project.

The primary project includes all the renovations and preservations listed above, enough to make Memorial Stadium the premier outdoor venue between Lincoln and Denver.

The expanded project adds the new addition to the East Stadium, giving Memorial Stadium the seating capacity to host statewide championship sporting events including track, football, and soccer; be the perfect venue for huge marching band field competitions having already been the host for decades of the Harvest off Harmony field competitions; and be a community gathering spot for all of Grand Island, the unifying force that Memorial Stadium was when the city gathered to celebrate its completion on September 16, 1947, three nights before the first football ever played there.

Lanny Martin recognizes the “Grand Legacy” that is Memorial Stadium. His gift and foresight have fueled the imaginations and energy of the Memorial Stadium Project’s leaders and created a buzz in the community. Rise connects the thousands of Senior High alumni where we hope the project will also create a buzz … and some action.