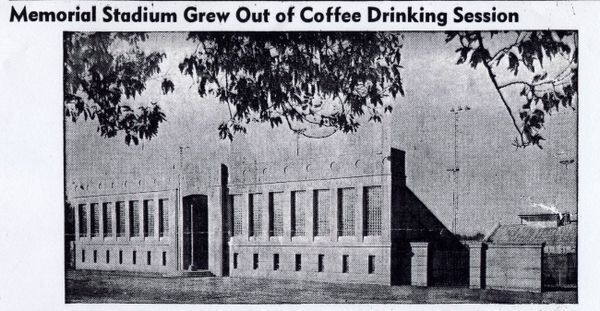 Out of a coffee drinking session in the Hotel Yancey coffee shop in World War II days grew the dream that became Grand Island’s Memorial Stadium. That stadium has seen Senior High School football games since 1947. The group of businessmen talked about what would benefit the city, and one of them remarked that Grand Island could certainly use a good football stadium.

“Why not go out after one?” another asked.  And the idea was born.

A campaign for funds was organized, with Lawrence Gorman as chairman. The campaign raised nearly $100,000 before the contract for the stadium was awarded by the Board of Education in September, 1946.

But the amount available from the campaign and from the sale of Ryder Park, the old football field, to the city was not enough. So a team from the American Legion, headed by Bayard H. Paine Jr., a recently returned World War II veteran, raised additional funds, and the job was done.

The Stadium was named Memorial Stadium, in memory of those who died in the war, and contains a memorial niche with their names inscribed.

The structure was dedicated Sept. 6, 1947, with Chief Justice Robert Simmons as the principal speaker. The first game was played a week later, and the Islanders swamped Norfolk, 45-0, to start an almost unparalleled procession of victories on the new field. They won three more games in 1947 at Memorial Stadium, defeating Kearney 34-6, McCook 74-0, and Fremont 13-7. They had an undefeated season, and won at North Platte in the Big Ten playoff.

Not until the final game of the 1949 season did the Islanders lose at home. In that game Fremont came up with a victory in a thriller 20-18, for Grand Island’s only loss of the year.

In the nine years since the Islanders have played in the stadium, they have won 33 home games, lost 7 and tied one. A pretty fair percentage of victories for any team!