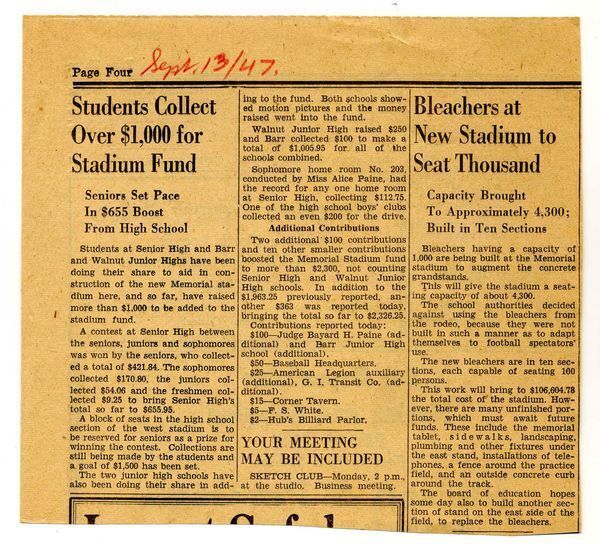 Students Collect over $1,000 for Stadium Fund

Students at Senior High and Barr and Walnut Junior Highs have been doing their share to aid in construction of the new Memorial Stadium here, and so far, have raised more than $1,000 to be added to the stadium fund.

A block of seats in the high school section of the west stadium is to be reserved for seniors as a prize for winning the contest. Collections are still being made by the students and the goal of $1,500 has been set.

The two junior high schools have also been doing their share in adding to the fund. Both schools showed motion pictures and the money raised went into the fund.

Sophomore home room No. 203, conducted by Miss Alice Paine, had the record for any one home room at Senior High, collecting $112.75. One of the high school boys’ clubs collected an even $200 for the drive.

Additional Contributions
Two additional $100 contributions and ten other smaller contributions boosted the Memorial Stadium fund to more than $2,300 not counting Senior High and Walnut Junior High schools. In addition to the $1,963.25 previously reported, another $363 was reported today, bringing the total so far to $2,326.25/