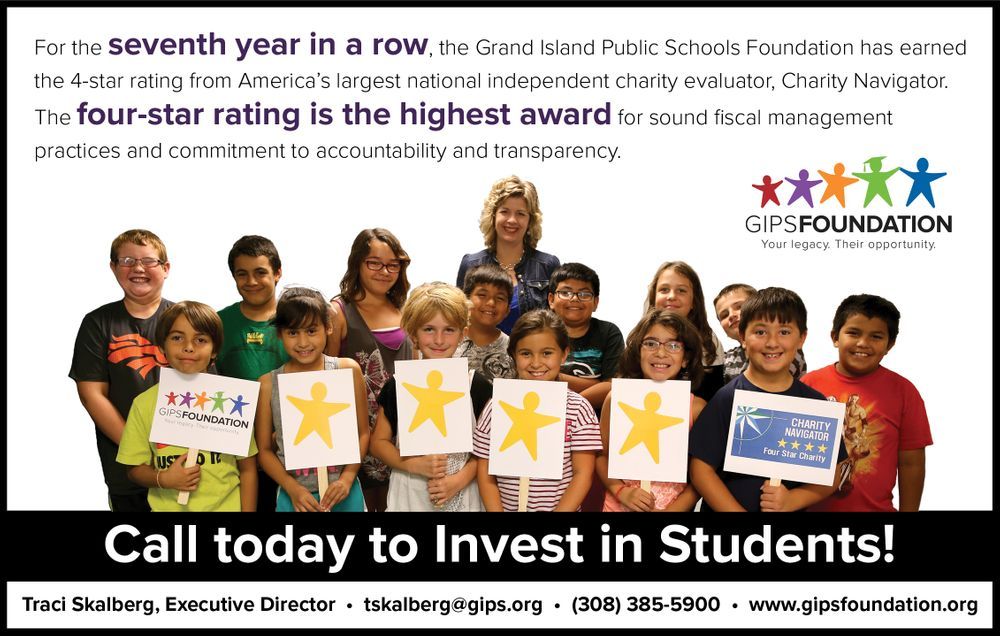 For the seventh consecutive year, the Grand Island Public Schools Foundation has earned the 4-star rating from America’s largest national independent charity evaluator, Charity Navigator. The four-star rating is the highest award for sound fiscal management practices and commitment to accountability and transparency.

“We are proud to announce the Grand Island Public Schools Foundation has earned our seventh consecutive 4-star rating,” said Michael Thatcher, President and CEO of Charity Navigator. “This is our highest possible rating and indicates that the GIPS Foundation adheres to sector best practices and executes its mission in a financially efficient way. Only 7% of the charities we evaluate have received at least 7 consecutive 4-star evaluations, indicating that the Grand Island Public Schools Foundation outperforms most other charities in America.”

“This exceptional designation from Charity Navigator sets Grand Island Public Schools Foundation apart from its peers and demonstrates to the public its trustworthiness,” relayed Thatcher.

Since 2002, using objective analysis, Charity Navigator has awarded only the most fiscally responsible organizations a 4-star rating. In 2011, Charity Navigator added 17 metrics, focused on governance and ethical practices as well as measures of openness, to its ratings methodology. These Accountability & Transparency metrics, which account for 50 percent of a charity’s overall rating, reveal which charities operate in accordance with industry best practices and whether they are open with their donors and stakeholders. On June 1, 2016, we upgraded our methodology for rating each charity’s’ financial health with CN 2.1. These enhancements further substantiates the financial health of our four star charities